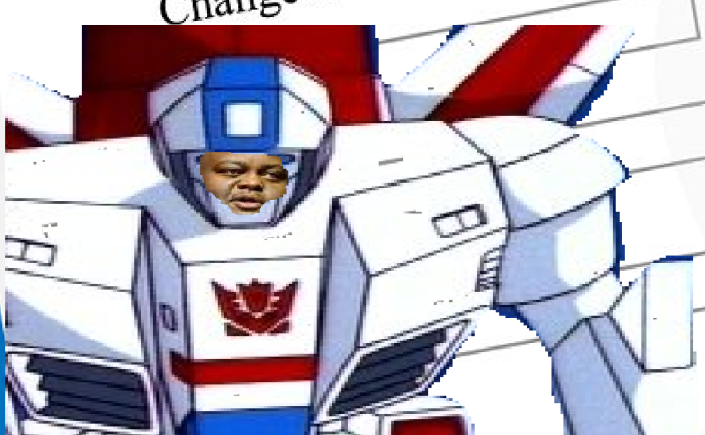 Back in 2005, I produced a gift-card for my friends for Christmas along the theme of pantomime. “Panto” is a UK theatre tradition at that time of year: theatrical childhood fables, over-bearing set design, D-list celebrities and some inter-active elements. My attempt was a success, so I vowed to make a panto comic every year and I didn’t. As the end of 2013 closed in on me, I’d still to invent something for Lynda Collins’ Belfast Writers Group competition. I’m going to run this story as a part-work over the next five days.

Chumberly Village Hall, well, it feels like 1954. There are two matrices of classic grey back and bum chairs, the size doing for children, dwarves or midgets. Take a seat now with the others. Ahead of you is a stage and a big blue curtain. Nice! You look at the people across the row and have a smile. A big blue curtain! A galaxy of stars the paper said. Smile at the people over there, oh! They’re not looking. What’s behind the big blue curtain? Somebody is sitting beside you. You’ve got something to say but, the show begins. The curtains swoosh.

The set is three advice hatches, drawn on figures behind each. A shape of a line of people stands alone on wheels. The waiting area has seasonal decorations: grey banners and doilies, fake box presents and a big grey tree. The sole living figure joins the queue wearing a specially made body of insulated fibreglass. It seamlessly covers him from dome head to boot heels. The outfit protrudes at his chest and behind in two aircraft-like wings. Underneath it’s Lavelle Crawford; he played Huell, Saul’s bodyguard, in ‘Breaking Bad’. A news broadcast can be heard through the speakers:

“Entertainers Tommy Cannon and Bobby Ball were arrested today in a high profile sting in Hollywood. The comedians were jet-skiing off the warp nacelles of the Starship Enterprise near Stage 9 at Paramount Pictures.”

“The pair are to be extradited as part of Operation Yewtree. In related news, the Metropolitan Police warn that Eddie Large is still at large.”

The robot leaves the queue and moves to the hatch.

“Uhm” he stammers, then chirpily, “Yes hello. I want to change my name to Jetfire.”

“Do you have family?” she snarls.

“And where does he live?”

“He’s in Pyongyang at present.”

“In the UK, Mister Skyfire”, the unseen woman spits. “You do realise that you can do this online via the UK Deed Poll Service?”

Skyfire glances at you and smiles. “That’s right.” But there is a silence: deadly, crisp, indigestable.

“Well if your brother Valkyfire is in Pyoongyang then he cannot witness you being sworn in by the Commission for Oaths, or a Justice of the Peace. So Why Mister Skyfire, are you. still. here.? 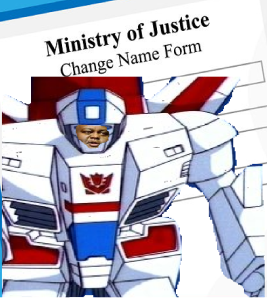 On a stick a cloud shakes down and Skyfire lowers his head. It follows his wanderings until two computer terminals roll to him. Skyfire sits at the nearer and his giant fingers clunk at the keyboard. His head shakes in exasperation and he clunks again. The Silver Surfer created by Jack Kirby sets up his cosmic surf-board against the monitor at the other terminal. The Silver Surfer is the slim and toned comic actor Glenn Howerton covered in Johnson’s Baby Powder and Co-Op Flour. Skyfire’s typing shakes the table and the surf board crashes to the ground.

“Enough!” cries The Surfer. “I’ve just come home after teaching at Harvard. Since my return I’ve been spat on and had to endure brussel sprouts thrown at me! Is that any way to treat a pillar of society?”

“I cannot help you.” says The Surfer, who remains focussed on his own monitor. “I lectured in Elvis impersonation”

“‘What robot are you: Macross, Hasbro, Bondai? How can I answer that? Damn lawyers. I just want to change my name!”

“Whoa man!” says The Surfer, for two cops have arrived. One grabs Skyfire’s wings and the other an arm.

“Mister Skyfire you might want to come with us. We have a lot of very bad words.”

The police pull Skyfire out of his seat, fart on his head and drag him off.

The wretched plasticine child with Art Attack hair pokes Skyfire’s head and dances back. There are four people in this dark and narrow scene. Two are sat on ledges, but otherwise the set is bare like the inside of a container.

“I’m Tori Amos”, she says, resting her hand a moment on Skyfire’s shoulder. When Tori Amos’s lawyers found out I was writing this story, papers were served, papers I’m sure Tori never saw. However at the time, I was playing “How many shredded carrots can you balance on your head?” with my friend Alison Brie off of ‘Community’ and ‘Mad Men’. Alison agreed to play the part of Tori Amos in this pantomime and told me to take the carrots off my head and find her a curly red wig.

“I’m Thomas Carnacki -Ghost Finder.” said the dark-haired man, offering his hand to Skyfire. His shirt is a purple and white floral design under a strong green Victorian overcoat and black trousers. In this instance he is played by James Marsters, a fine actor who deserves another chance after being rubbish in Torchwood. Oh he was. “Where you part of the Seventies operation?” Carnacki asks.

“My immigration papers were delayed.” Skyfire replies groggily. “I’m an autobot. I have no interest in sex. I would not be arrested for sex crimes.”

“Jazz, Sunstreaker, Bumblebee, Arcee, even Sludge of the Dinobots. There are plenty of arguments to that assertion using Karl Popper’s test of falsification and deduction”, remarks Carnacki.

“The Met are imprisoning anyone famous from the seventies.” says The Silver Surfer, once unseen, now rising from the floor.

“Don’t gaze on me in that manner.” barks The Surfer. “My only crime was an addiction to Candy Crush.”

“Or being herald to a planet devourer?” Carnacki seethes. “Perhaps if you were less distracted with Facebook, we wouldn’t have a society were Blue Peter presenters were forced to go on the run! Dear Boy, might you try and understand this?”

Miley Cyrus The Elephant Man tucks her head between her bendy spread legs and pushes her back between them to a diagonal and lopsided roll. She screams and lands on the floor with Skyfire and The Surfer. Everybody shakes and the set moves as if like a van has stopped. Strong torch-light shines deep through them from a door at the back. It’s a London Met shock troop looking like Boba Fett.

“Aright you lot, on your feet! Move at, move at! You dorty swoine!”