“I couldn’t help but think of the Underground press of the sixties.  Andy’s prose has similarities to that of writers for OZ or International Times in the mid sixties, carrying the same energy, directness and belief.  – Peter Duncan, Splank!

Axel runs Truth Live, a patriotic freedom-loving news site with a cult following.  His obsession with the New World Order tests his family, and in Election year, those bonds are about to snap. When Candidate Morgan Rump and Faux News decide to co-opt Axel, the conspiracy theorist goes on a trip down the Illuminati rabbit-hole that’ll leave you howling like you’re part of a mad elite ritual.

A sitcomspiracy, from AG Publishings.

You can buy Axel America from the following fine stockists:

Keen readers found Axel gave two on-air gave hyperlinks and passwords. One of these isn’t accessible so I’ve decided to just direct link them both.

The Infothon: Secret Callers
Extended draft of the beginning of Chapter 16: Into the Madness
Password: callers

Chapter 23.5: The Initiation
Unseen deleted chapter, set after ‘Axel-Bot 2’ and before ‘Secrets behind the Curtain of the Cabal’.
password: initiation

I was promoting by spending time with podcasters and bloggers who want to chat, so here’s a list of all those who helped, my thanks to them. 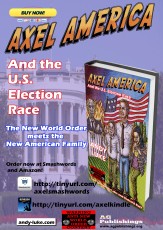 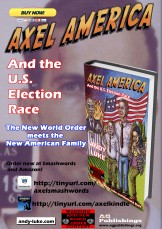 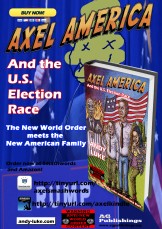