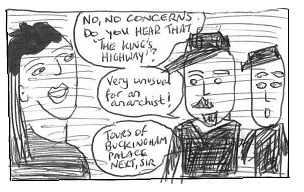 Moved by Gran? Educated by Absence? Interacted with Don’t Get Lost? Then you’ll probably want The Spook. Created in Farset Labs in 2018, this served as a rough draft for Occupied chapters 7-8. Early pages are raggedy but it gets good hi-speed comixing:

Optimising this for the web I followed the style Stephen Downey used at absencecomic.com. The images were merged in blocks of six with the easy free filesmerge.com making sure to keep altering the merge order as the display changed it in order of load. WordPress typically shaved 82% off image size but Freshtechtips provided a no-plug in solution: through settings to Media Settings and saving all image sizes to zero. The blocks of six were then re-saved to a 640 horizontal (maintaining aspect ratio) for efficient rendering, and re-merged.

This post was made possible by my supporters on Patreon before the three-month hiatus. The final version of prose novel Occupied is available to buy from Amazon in paperback, hardback and Kindle formats. Libraries and retailers, contact me about cheaper than Amazon stock. You can read more about the novel on this page on this website.