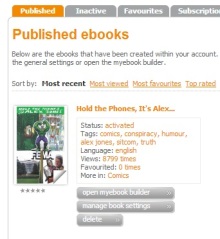 I’ve been watching Alex Jones on and off for nearly a decade now, and I think this is the first time I’ve seen the one-man media corp trend on Twitter. Unfortunately, for nothing good. I’ve not seen the clip yet but I’d imagine it’s one dubiously opinionated a-hole scream at an opinionated dubious a-hole.

A year ago, I got together with five other comics creators to release a sitcom-spiracy based around Alex’s domestic life. In some respects, it was a success, with the fourteen page preview amassing well over 10,000 views, most of those on Myebook. From another view, we’ve sold not a single copy of the PDF, and I’m beginning to suspect somethings a little awry. Conspiracy? I’ve moved the Myebook sales back to my own control, just to be sure.

For the record, I think guns are the tools of aggressors, be they government or citizen. So it might seem callous of me to take advantage of the #trend to $cash in on Nutjob Vs Nutjob. Still, giving me your traffic and cash is better than giving it to anyone who promotes those two right now.

Follow the father of 911 Truth as he travels in time through American history, faces vaccination and innoculation, resists the attempts of big media to hypnotise his kids and join him. See him advertise water filters and gold seeds, fight enemies foreign and domestic: including Alex’s wife, their son Constitution, daughter Wrench, 1776 the family dog and Orwell, their deceased cat.

Co-created by Andy Luke and Professor Octagon
Includes: Swimming Pool of Death, Declaration of the Co-Dependents, Beck Vs Jones, Anger Management, Good Constitution Hunting and You Want Answers?
The Winged Head of Alan Watt and Alex’s Personal Guarantee! by Ben Stone
Super Bowl of Fascism by Geoffrey Wessel and Sean Duffield
Co-Opted! by Professor Octagon and Bisson
The Sound, The Fury and Alex Jones! by Luke and Bisson.

A bumper 44 pages of conspiracy comedy!

You can also get the print edition of the comics mag through Indyplanet – costly 10 dollars or so when the postage is in, tho they’ve done a lovely job.

Columns on comics from the old Alltern8.com here

Heroes and Legends con in Belfast the following weekend.

More details in a while.