War: The Human Cost, is a muscular 260 high quality stock pages of great comics from Paper Tiger. Cliodhna Lyons and Ivy, singer from band Axis of Arseholes, represent the Irish contribution, in a work that spans 19 countries.

The project has been several years in the making and is the result of Kickstarter contributions, and collaborations with Campaign Against the Arms Trade and creatives involved in the work of Amnesty International, War on Want and The Red Cross. It’s not light on big names too: Spain Rodriguez, Steve Bell, Daniel Merlin Goodbrey, Aleksandar Zograf and Sean Michael Wilson to name but a few. There’s also a CD, “War and Peace”, which boasts inclusions of Michael Franti and The Spearheads, Big Youth, Sly & Robbie, The Levellers….

Given the central polemic (67 creatives on anti-war opinion), anyone would expect the content to move towards arrogantly self-assured. I’m happy to report that any such dogmatic preaching is at it’s bare minimal. Debra Lyn-Williams and Peet Clack’s “War Wounds” shares the hidden narrative ofthe home consequences of military flashbacks, and is one of the many heavy-hitters in this book. Marcel Ruitjers explores the Bush-Nazi connection, a narrative often resigned to the slander of conspiracy theorist, and realises it with right-chord caricature pen proof. Other artists veer off in this direction with traditional cartoon analogy or fables, such as Peter Kuper, Latuff and Lee O Connor

Alejandro Alvarez delivers a relationship between reader and cast, communication and health, mind and power, in a story about Camp X-Ray. It’s one of those based upon real lives, as is Christopher Rainbow’s drawings of interviews with residents of Harmondsworth Detention Centre. This is a particular speciality of Sean Duffield. Together with Lawrence Elwick, he recounts the life of Palden Gyatso (in first person narrative), which acts as a useful tool to teach on the history of 20th century Tibet and the human rights movement there. Thirteen pages proceeded by a two page text introduction is a good example of how Duffield as editor creates unstated chapters in the book, on arms manufacture, detention, propaganda and international relations. His ‘Liberation in Liberia’ charting the women’s civil rights movement, is another on a par with the work of Joe Sacco. 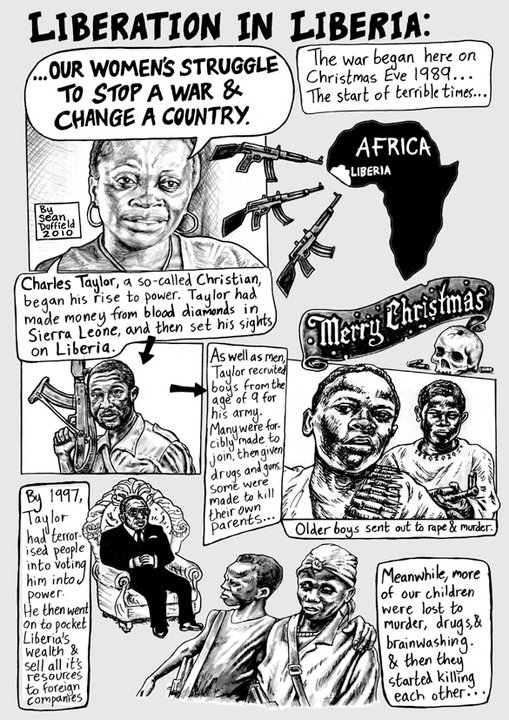 Obligatory mention to Paul O Connell, best known for The Sound of Drowning and The Muppets Wicker Man. O’ Connell has four pieces in total. The fumetti (photo comic) style for which he’s known is employed in an excellent piece on the cold war, and a wonderfully written short visual essay, “Orwell on War”. There’s divergences too. The anachronistic Boys comic classic painted work right out of Middle class England is jarring ripping serenity. The images narrate a boys journey to war, with a pat on the head from the village shopkeeper and the gentleman recruiter.

I’m not going to get into the cd review. A job for another reviewer. In summary, the flaws I find with “War – The Human Cost” are much as you’d expect from me. It’s not likely to be stocked in most FPI or other comics stores due to either mobility problems in distribution or the small-mindedness on a store-owner’s part. For the same reason, it’s unlikely to win an Eagle Award (which it richly deserves to), because voters are likelier to cite Preacher as best new graphic novel. A digital download version would be a wonderful thing I think.

War: The Human Cost is currently limited to 750 copies and retails p&p inclusive at £12 (UK), £15 (Eire) or £17.69 (Rest of World). Make your decision to buy it soon. £1 from every sale goes towards Campaign Against the Arms Trade

With the UK general election happening this week, democracy gets opportunity to curtail the taint destructive politicians have left on the world stage. I thought it might be interesting to deliver a round-up of what some British cartoonists have been saying on the matter.

Labour or the Conservatives (or ‘Unionists’, as they used to be known, and sometimes are in Northern Ireland) have held power for 65 years. So, care of Sean Duffield, a four page look at the Labour leader, David Cameron,

Ah yes, Cameron’s friendship with Rupert Murdoch, Google-fearer and owner of the British registered Newscorp (BSkyB, The Sun, The Times), which avoids paying tax in Britain.

Might we be seeing this sort of thing in a Murdoch-Cameron Britain? 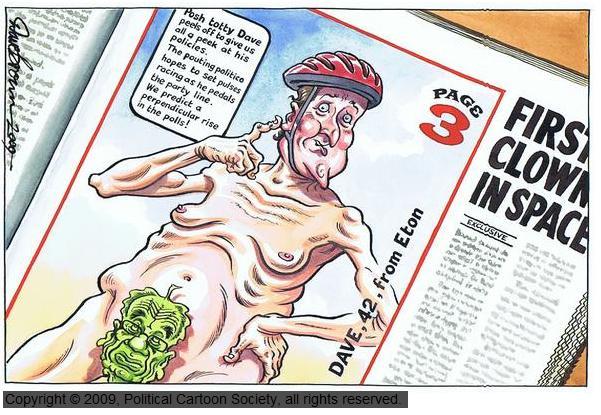 Marc Roberts of Throbgoblins,
“I’ve been playing around on PhotoShop (other image manipulation programmes are available) and have come up with the following. It’s mostly a tad sinister – UK politics and the pending ecological debacle”

Crazy internet-fearing Murdoch, drawing threats on the BBC, a public service broadcaster funded by the public since 1933 with it’s aim to present fair impartial reporting.
Here’s a cartoon on favourite LibDem Clegg’s victory by Rich Johnston from the 26th April as originally posted to Guido Fawkes. 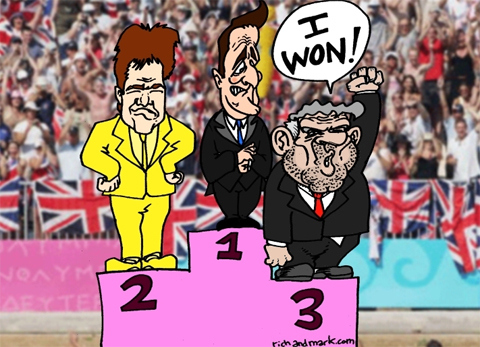 And of course, the always admirable Steve Bell in his work for The Guardian,

So, really a televised leadership election debate should have taken place at the BBC rather than being relegated to third place after the commercially funded ITV and Murdoch’s private BSkyB.

Above: Two more from Steve Bell and The Guardian.

Now the UK have a chance to lock Murdoch out of UK politics and cut the propaganda that has seen the nation’s Green Parties, the welsh Plaid Cymru, the Scottish National Party and others locked out of these debates.

Oh, and this guy too.

The image above by Holocaust-denying racist Nick Griffin, parasite to re-opened multi-party politic talk. It’s another by Sean Duffield: Go and donate a few pounds towards War – The Human Cost, a brilliant BRILLIANT anthology he’s hoping to get out.

The BBC brought us the iconic kids show Bagpuss, and here’s Sean take on Gordon Brown. 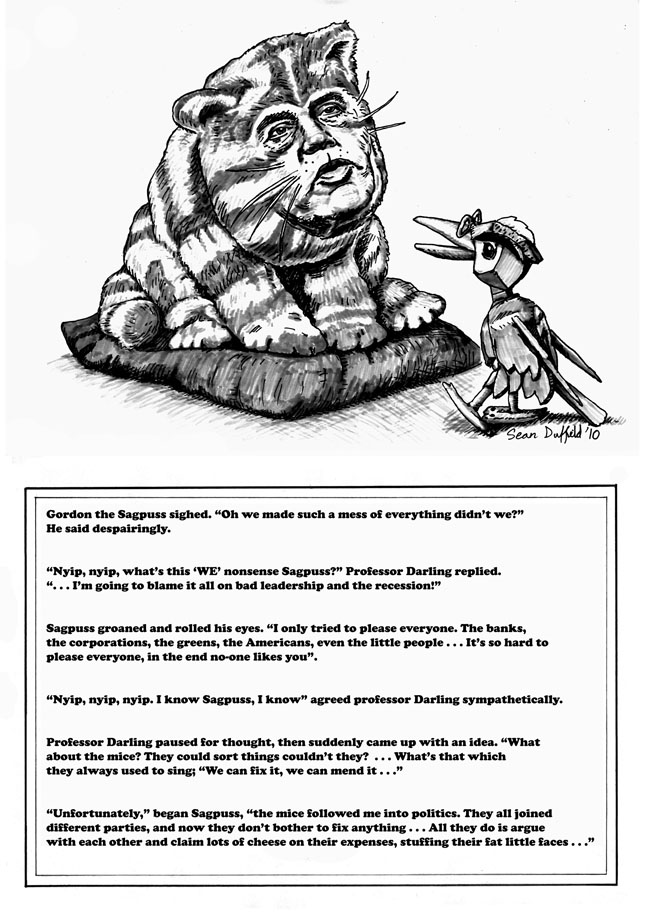 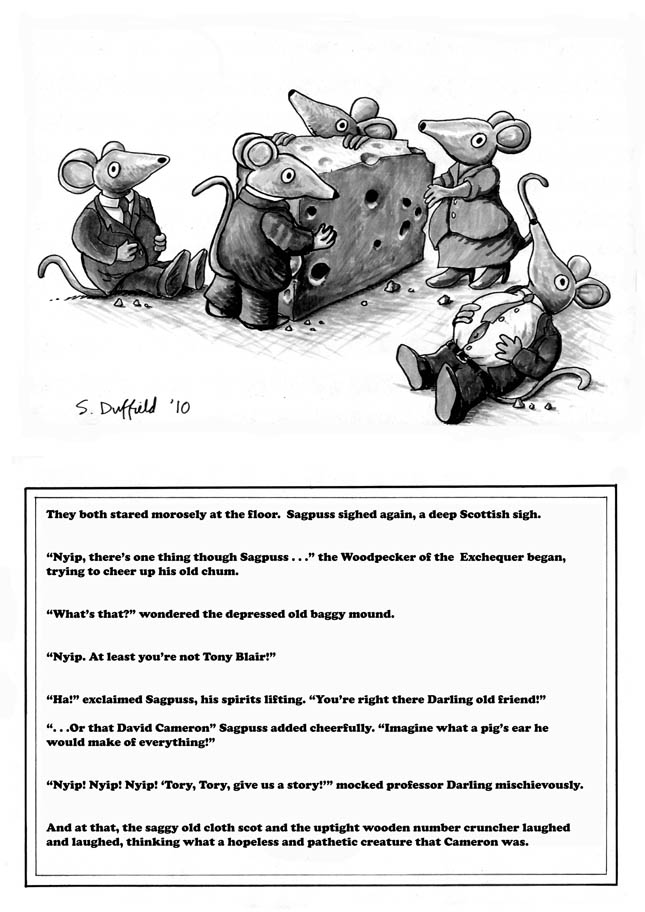 This will be the first UK election since Web 2.0 has fully worked it’s way into British culture. Hopefully we’ll not get any Votergate-type scandals and see elected tolerable agenda for the job.

Murdoch isn’t the only unelected dictator we need to get rid of, after all.

And what of this man? 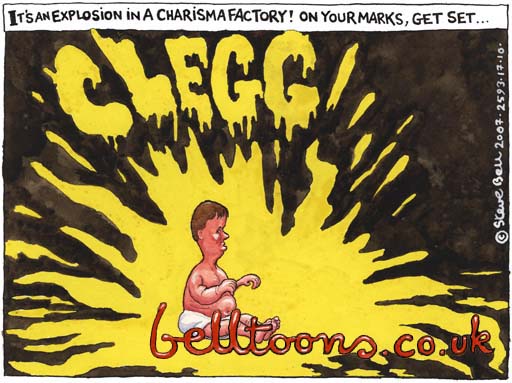 He may very well be the UK’s new Prime Minister.

Modern politics is driven by who you can’t vote for, rather than who you’d like to. Still, being cooped up in Westminster talking only to other politicians is an uneconomical reality to face. 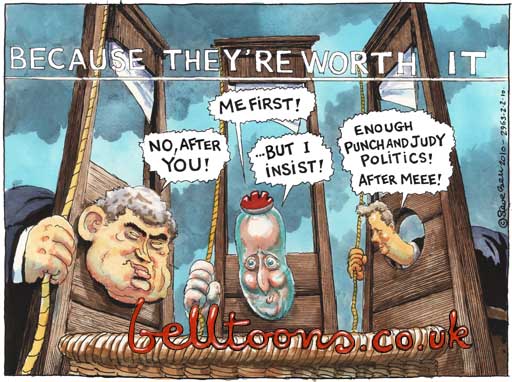 The above cartoons are by Steve Bell. There are some more of them here.

Dave Brown, then Peter Schrank (The Independent) as to how they’re not really of the same thinking state as many of us,

Some things are just too prescient. Morland Moreton from The Times way back in 2006..

Please vote on Thursday. Sure they’re all crap, but not voting helps keep them in power. Remember, ‘Hung parliament’ is code for greater democracy.