Nope, commonsense law has not changed. You don’t push yourself really hard if you’re gonna be at risk because of it.

The day before yesterday, I had a woeful day. Having just gotten enough money to buy electric and gas (thanks Ben!), I tried for bed early only to get insomnia, diarrhea, fever and fatigue. Then I overslept and missed my fortnightly writer’s group, woke up to find I’d not hot water left. Today, there’s fever and fatigue residue, so I haven’t had time to create anything new, but I did find this video on an SD card from my residency at the Arts and Disability Forum. It was shot in March 2011 by gallery organiser, Leo Devlin.

As this came to mind, here’s an original promo sketch for the exhibition. 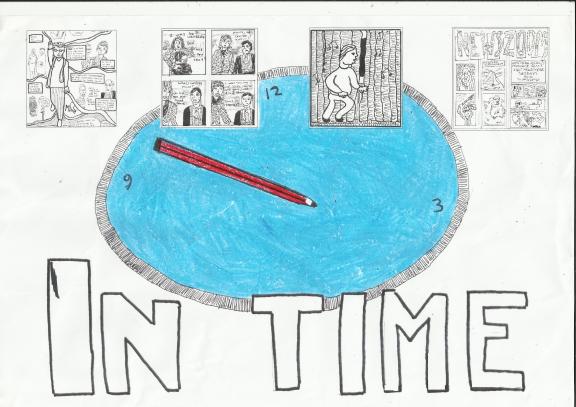 If you’d like to know more about the ADF’s links with comics run a search on this site for Going Places, Beneath the Tide or Bacon Sammich of Doom. They’re also big fans of Crippen.

I’m going to nip out to Tescocks shortly, but there will probably be a truck that throws rottweilers at me and when they bark, fireballs shoot out their mouths, and those fireballs separate into wasps, fire-wasps. 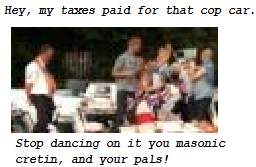 A good reporter works and checks multiple sources but today I was inspired to steal from one video.

NI2013. Our time. Our place ‪#‎Wrecked‬
(created by the brilliant Loyalists Against Democracy)

I used to make a paper in the form of a comic, but this time I did something more traditional.
If you’re having trouble seeing it, you can download a better quality version from here and circulate merrily.

And yes I do hope the police arrest them.

Trailer: Caution, you thugs and bullies. For the people of the earth shall grow sick of your interruptions to their lolcats and Instagram and see you. Your ire will be met with a bollocking from the internet, the like of which your stomach has not known since that curry kicked diarrhea from your boxers and all down your legs and you were in agony for days. Don’t do it again. 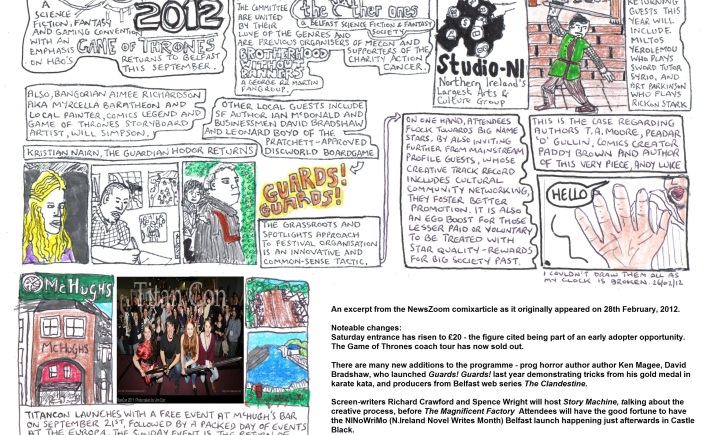 A little known fact of making comics is that the creator prevaricates. Just then I went out to see if my wheelie bin has been returned, to avoid writing this. Many creative works are generated from a spur-of-the-moment thought or set of actions. Focussing on one idea, is where it’s at. I’ll admit to time excess on a project, but my best works are undoubtedly the ones I just did quickly.
I’m good at this. Here’s what I think we should do.
I’ll tell you how to make comics in fifteen minutes. And for another fifteen, I’ll talk about creator’s rights and self-publishing. Then you spend an hour on making a page of your own. If you want to pair up, you can run your work to two pages. We’ll work in biro as it’s speedy and less messy. Paddy Brown, or PJ Holden will be around to offer support. No ‘To Be Continued’, no pin-ups; sequenced visual/textual story – is the way. When the clock stops, it’s over.  You’ll sign a form saying I’ve a one-time right to reprint your work and as you saunter around the convention. I’ll be doing just that. Within two hours, a limited edition anthology comic featuring your creativeness, for free. How’s that for hey presto?
What a lot of fun.
The Magnificent Factory makes it’s debut this year at TitanCon, Europa Hotel, Belfast, 22nd September.  You can read more about it on their website, and join the Facebook group for TitanCon and one for The Factory.
You can help me anticipate the publication by pre-registering as an author at this facebook link or that email. Please don’t if you won’t. We’ll be making an 11am start at Castle Black.
Numbers are inevitably limted, though there will be an in-session registration.
To clarify:  All artwork will be returned within two hours. Print runs may vary depending on size of event and budget. If event organisers decide the book is for sale, it shall be to cover print costs, with profits donated to charity, and time-frame limited to the event itself. (For TitanCon, we’ll be donating proceeds to Action Cancer) 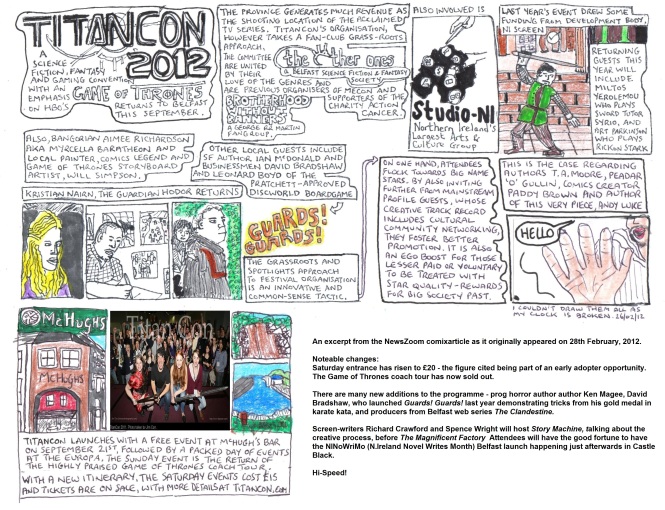 If you’re further afield, The Magnificent Comic Book Factory will be visiting Galway in February 2013.
ps The workshop hosted by myself and Downey as part of Bounce! was an incredible busting success. Watch this space, stephendowneygallery.com and the ADF.ie for more news.