When I was preparing for the Belfast Comics Fayre last year I put together three issues of a comic. It was modelled on Willie Hewes’ Goth Boy –  one sheet of paper becoming 16 pages. My usual mistakes: too much detail, and printed on poor stock.

Oddly, Kick! works brilliantly as a digital comic, and so I’m pleased to offer the first three issues as PDF files. And I think some of you will get quite a rise out of the contents.

(Despite the colour cover below, these pieces are black and white)

CONTENTS as above, including, “The A-Team” (reprint), “Cobra Commander Says” and “Allergy“.

Sorry, there’s no option for all three. When you’ve made the Paypal payments, you’ll be taken through to the PDF were you can “Save as”. They’re small 2-3MB files, but this is some good work. I even inked it.

Reviewers can get in touch for a freebie. 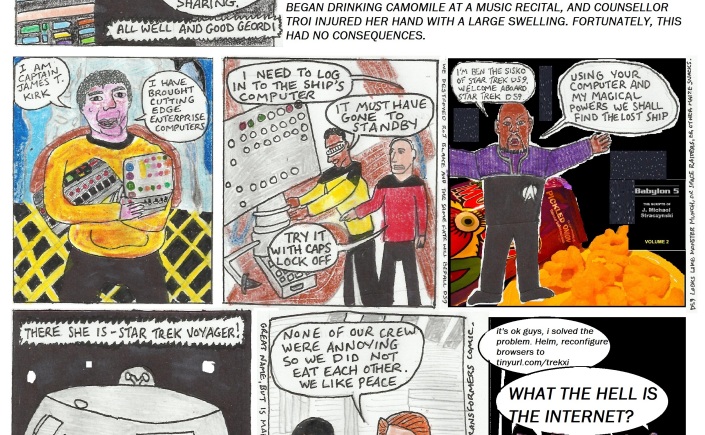 Around Christmas, I’d an art commission as a gift for a Trekkie, who did not like what JJ Abrams did. The brief was for a friendly wind-up: make it look like Abrams was the definitive version, with TOS to Enterprise pale in comparison.

I’m taking a distance from making comics for a while, although you can buy issue 1 of Kick! online.

16 pages of brand new digital comics. Includes The children of Mow Street Mall, The A-Team, Doomlord X and Allergy, another tale about shopping.

Only 30p, available through Paypal.

Galway University of Galway ComicsWest event was due to go ahead next week, but now it’s not, left until the summer. Everybody’s friends, The Emerald Garrison, are running the Heroes and Legends Con on 16th-17th February, at the W5 in Belfast.

Ahead of that, friend to my readers Stephen Downey, is signing his new comic Noe The Savage Boy with writers Mal Coney and Rob Curley at Forbidden Planet Belfast on February 9th, between 1-3pm.

The Belfast Comics Fayre took place on Sunday, and as this week in Belfast would have it, was hampered by the bullcrap foisted on us by a small minority of troublemakers. People preferred to stay in, rather than risk travel being halted by little boys with dangerous toys. In a time where the rights of British-Ireland are called into question by international eejits, I can think of no way that the province’s status could be more sorely damaged than the violence of fleg-fighters. It’s a shame they devalued the identity of “being Northern Irish”. If only they’d take the short cut by actually shooting themselves in the foot, they’d save all of us bar the nurses some trouble.

For the guests that turned out we recouped something. We had some great craic with Bobby Best (The 2dcast), Stephen Downey (Noe The Savage Boy), Derm McGuigan (Potato Vampires) and I’m told Lightning Strike Comics Presents and Darrin O’Toole’s Tales From The Void are now on sale at FPI Belfast. Issue 7 of Paddy Brown’s Cattle Raid of Cooley is likely on his website bookshop any day now.

A future event is planned.

The ADF’s annual open show is again dedicated to seasonal gifts made by disabled artists, enabling you to spend for Christmas with a conscience! The artists have supplied small-scale work of all kinds with a modest price range, and I’ve work in there along with Alice Burns, Andrew Cooke, Andrew Gahan, Jennifer Hanley, Johanna Lodge, Rachel McBride, Niall McCormack, Sinead O’Donnell, Roisin O’Hagan, Keith Sheppard, Deirdre Ward and Trevor Wray. December opening hours are Monday to Saturday 10am–4pm, with occasional extensions. The Arts & Disability Forum are based on the ground floor of 109-113 Royal Avenue (opposite the Mace), Belfast BT1. You can invite friends on Facebook and there’s a special seasonal celebration from 5-7pm on Thursday 20th

Here are some photos I took at the opening. 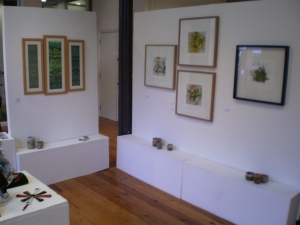 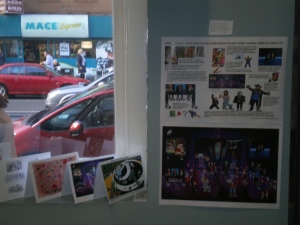 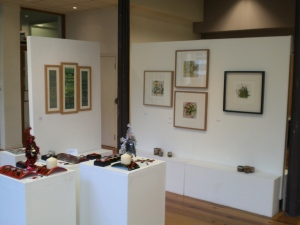 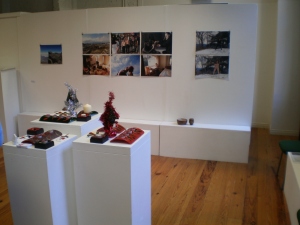 You can buy Issue 1 of my new digital comic, Kick! It includes The children of Mow Street Mall, The A-Team, Doomlord X and Allergy, another tale about shopping.

I’ll be stripblogging my new Xmas card comic here a few days before Christmas. In the meantime, you can buy it from the ADF, or the online shop.