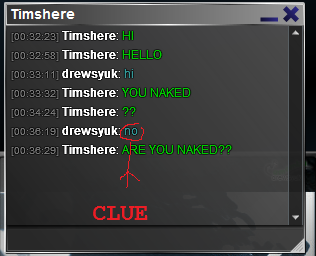 Every so often I like to go on a webcam chat room. Some say every night, three times a day, but I say every so often.  I hear the remote world insisting there’s a taboo, that webcam chatting is stupid and I laugh, because those are very stupid people and perhaps in need of a crash helmet.  I’ve met a leading European cartoonist, the chief tribesman of a very small Atlantic island and one or two attractive folk maybe. But for every one of them, Tim Shere,

I didn’t come onto him. Unlike today, when I purposely posed as a woman. There’s some scandalous bullshit women have to go through, and its not fair on their male or trans friends either. I’m Charlean.

Sorry Mike, thanks for helping though.

I was talking to my friend Aurora on one of the (intently) cleaner chat rooms (that reinforces the rules properly), when we got a fella asking to talk dirty. This is usually met with people telling him to take it someplace else, but I decided to IM him and troll-the-troll. Thing is, he saw me coming…

And JadesDJxT became a a room regular.

Here’s a little comic I did about a few of my friends. They have potty-mouths.

If yer asking, I prefer Camchat to Camamba. Maybe I’ll do a comic in there sometime.

This comic originally saw print in Issue 12 of The Alchemist, way back in 2000.  The Alchemist was edited and published by David Hobden and had a lovely art-book feel to it.. There featured quite a bit of work by Scottish punk psychic cartoonist John Miller, as well as Daryl Cunningham, Peter Poole and others.

Dek Baker was a bit of an underground sensation at the time, mainly Wargods of Atlantis and it’s spin-offs attracting a hardcore of Kirbyites and Golden Age yarn-spinners. Stuart Luke had guested on my own hub comic, Bob’s, which I suppose was fairly popular in and of itself. He may have been responsible for some of the lettering and inking here, although I don’t remember too well. Anyway, here it is. 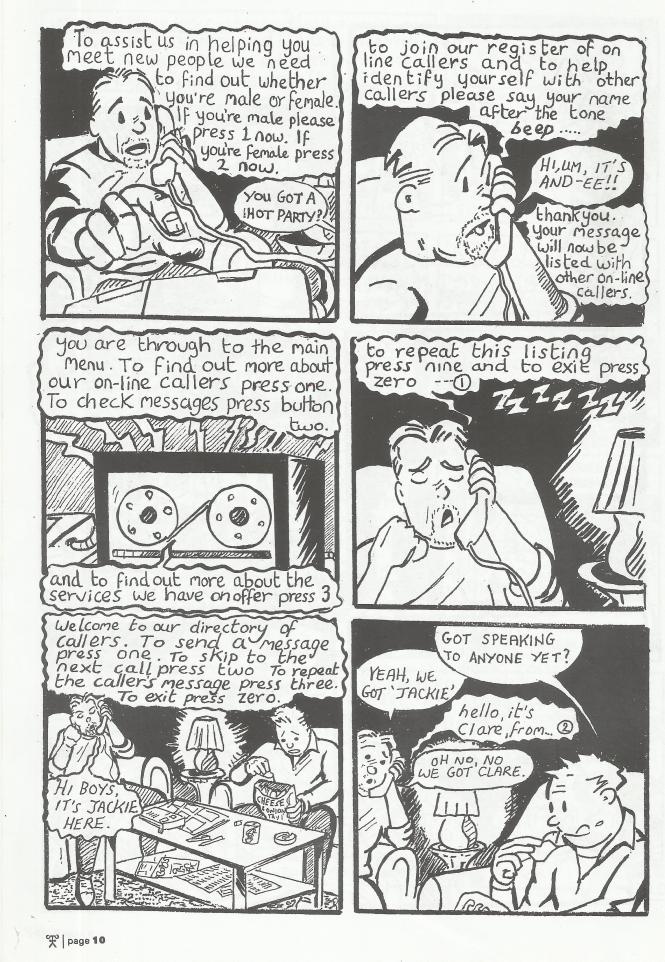 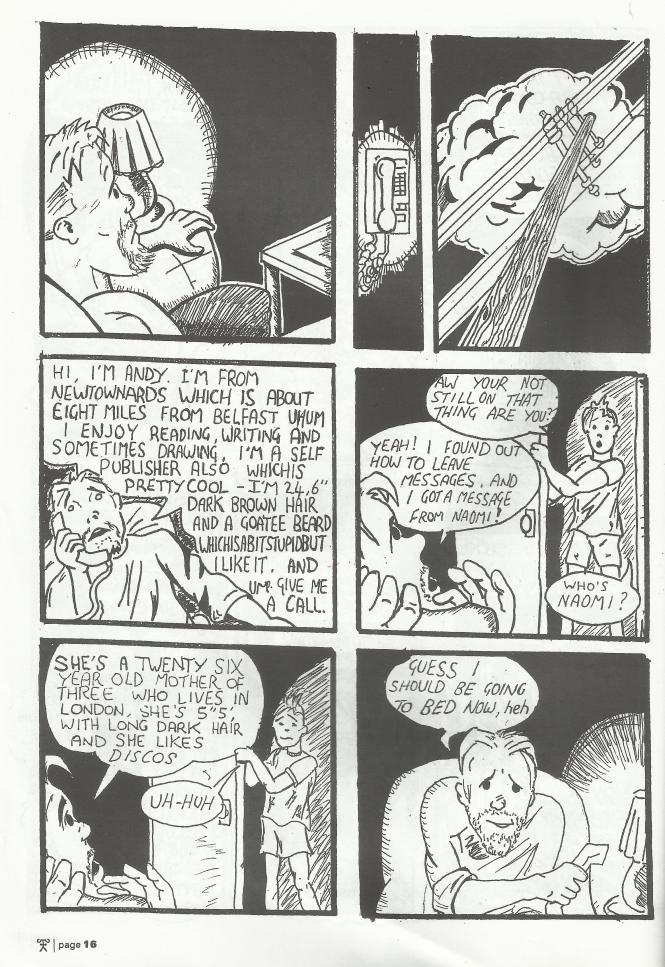 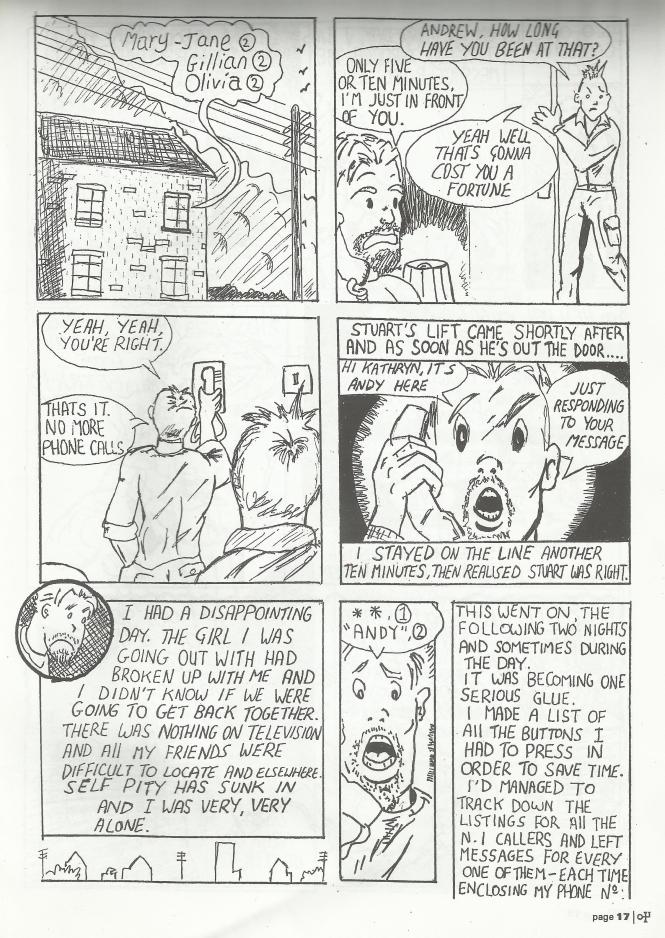 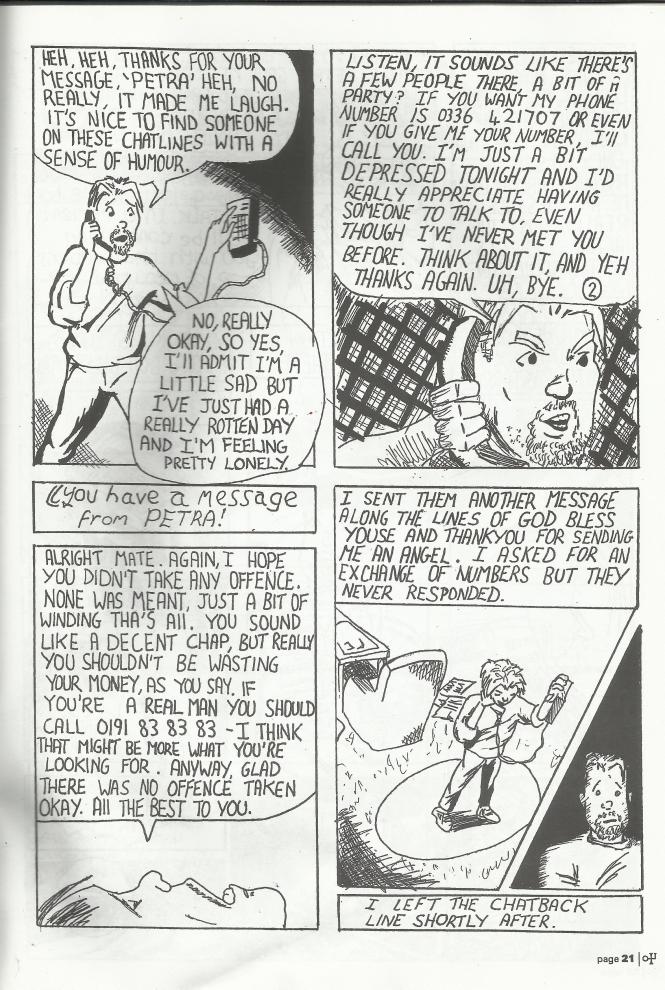 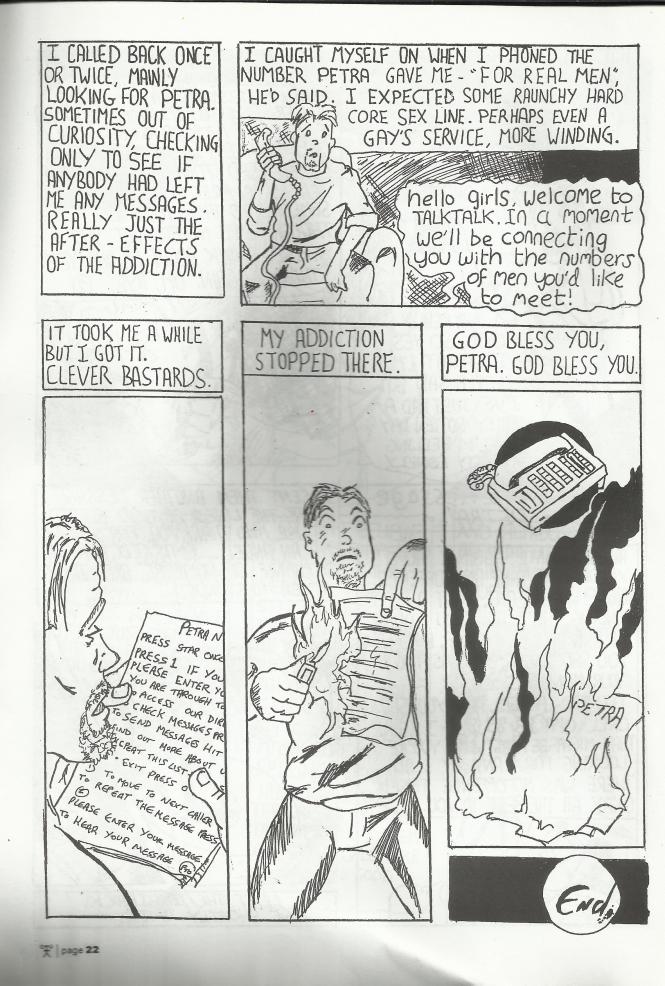 With Nina O on first and third panels, improvised.

UPDATE: I forgot to mention I’ll be doing short story readings at The Shankill Library (11am) and The Falls Library (12pm) with the Belfast Writers Group this coming Saturday. Please invite people along – here’s a Facebook place-setter.

I had a lovely time at TitanCon at the weekend and I’m beginning to feel a bit like Khaleesi gathering an albeit more casual army. After four weeks of hard con promotion I’ve been swearing on a holiday, and using my half-price travel pass to stay at some hostels. Morally, as long as I keep applying for jobs I can live with this.  It’s no skin off my nose, remoteness isn’t a disability to seeking employment where there’s free internet. As soon as I clean up the mess from a few dodgy editors I’ll plan out how this can work. I’ll be at the trip for six or seven weeks, that’s my best intention.

In late November I’ll be attending the Midwinter Comics Retreat, supping wine with comics chums as intended by the Debra Boyask, who I loved to bits, who I miss and has gone on to take her place at the head of the pantheon of tea gods. We’ll be heading out (maybe) to Sturt Farm in Wickwar, Gloucestershire from London. While I’m in England I may as well take a few days lapping it up. Get in touch if you want to spare bed me.

One of the effects of running two comics workshops in a row means I’ve a mass of art pages to scan up. An unfunny thing happened on the way to TitanCon in that I lost my bag of art equipment to Translink’s Metro bus. It was recovered this morning, despite explaining to staff the details and urgency early Friday afternoon.  I’ve never heard of anyone recovering stuff from Translink’s lost property so I’m pleased to have got it. We managed to make do extolling the virtues of biro comics and squeezed a 90 minute session to 30 minutes. The theme was jokes. The full collection will be on the TitanCon website in time, meanwhile, here’s my own contribution.

Today’s piece came out of this article by Mark Littlewood calls for a public domain register of benefit claimants.

They cannot be serious: but published, a right-wing agenda by a man with Westminster pull –  likely means some other mad kunter will try.

Thanks to @wheresbenefit and their peer group for bringing this to my attention, esp. @trialia and @latentexistence

More details on the ATOS incident alluded to in panel 4 here.

PS Why not sign the petition calling for the sacking of Littlejohn after goading suicide Lucy Meadows? Go on.

A while back, I posted Optimus and Me and though it was made in 2007, seemed to get a new lease of life.

There’s been a few recent surges in traffic here, and as much as I need the money, I’m not alone in these rough times. So, here’s the stand-alone sequel, The Moods of Prime. Please tell people about it, and write nice things.