Front-loaded with sequential design and a timeline of atrocities flowing. A futureworld of Pat Mills’ evidence-founded speculative horror. Artist Carlos Ezquerra’s rich figure drawing and the painted colours seemed to move in the heat of South America with its dust and its fire and sheer assault. The slums, the shanty-towns and the barrios; the expressions and adrenaline of fear and the barking army-life. The opening salvos of Crisis, a fortnightly magazine from the makers of 2000AD. As a publishing operation, it appealed. 2000AD was as the time bogged-down by more continuity than Marvel and DC, and it’s readers seemed like a clique of a club: they didn’t want me there. Crisis took the science-fiction genre and rammed it past those worlds detached to me. Lead strip Third World was about things that were happening around me, there and then.

The British Government had instituted compulsory national service from age 18 to work in the poorest countries of the world. They were to protect the interests of multinationals (a new phrase to me then) from the trigger of a gun, if necessarry. The focus was a unit of teenagers charged with re-educating and re-orientating locals. They did this reluctantly, through fear of the threat of force, or through blind faith and ignorance. Unlike a 2000AD story, we weren’t often treated to discussions of active conspiracy to liberate from an unjust system. This was comics realism. Sometimes you just have to follow orders, thousands of miles from your lovers. 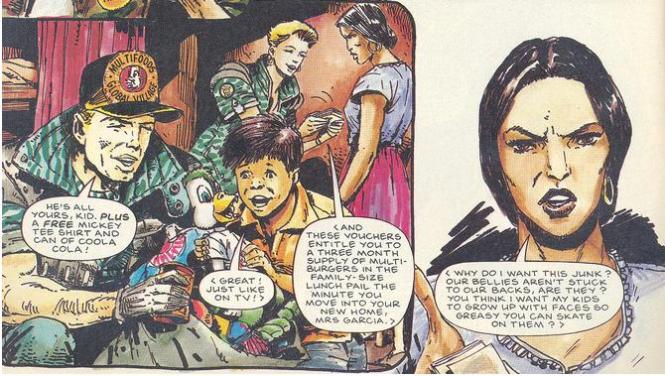 Third World War has been accused of many things. The characters sometimes lapsed into sociological text-book mode: Haralambos-speak. A fan, Hipsterdad, has referrred to them as “two dimensional” and “only open-minded insofar as they reject conventional society in favor of paganism and rebellion.” The character of Trisha was the type of olde christian. Practicing the faith at the time, she enabled me to see the hypocrisies of some of my fellow Christians’ attitudes and question other characters’ responses, which largely consisted of bullying her. In retrospect, it was Dawkins, perhaps filtered through Mills’ motor-noise soundtrack of The Dead Kennedys, Napalm Death and Chumbawamba. In the affluent part of Belfast, I didn’t know any blacks or punks or soldiers. Stereotypes are not useful for relating to specific people or scenes, but can be helpful fixing in on a broad-area signal. Dave Merrill at the above link is of the opinion that 3WW was so guilty of soap-boxing it was “soap factory-ing”. 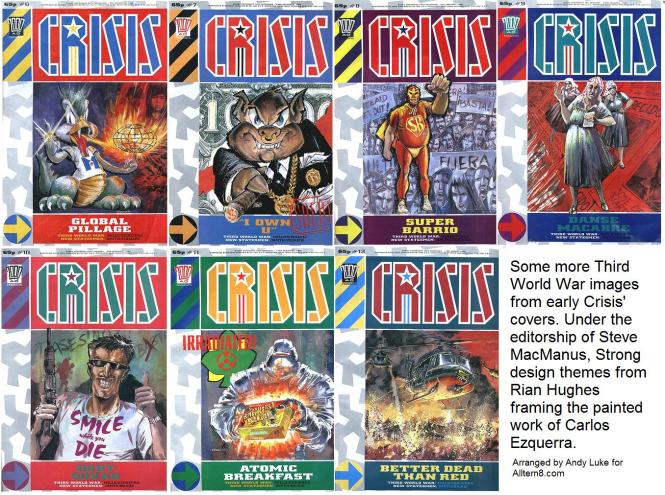 The format of the strip: two fourteen-page installments, allowed for a quick presentation of a story, before moving on. Mills and Ezquerra didn’t waste their breath. Immediately readers were told about psychological warfare battalions (which our cast were part of), Agent Orange and free fire zones (cattle grazing land prepared by napalm). I was introduced to phrases like “Low Intensity Conflict” and the global horrors of the debt crisis engineered and fed on by Western bankers of the IMF. One story focussed on Coca-Cola’s links with death squads, forces which continue to be complicit in the murder of trade unionists in Guatemala, twenty years before Mark Thomas’ would write Belching Out The Devil. Before he would write about Britain as one of the world’s major arms suppliers to repressive military regimes in the form of CS gas, leg irons, armoured cars, surveillance systems and gallows. In one discussion of strobe guns a character remarks, “Its okay, its been tested in Northern Ireland”. Mills wrote about torture and disappearance, child soldiers and secret police. He talked about food irradiation and sterilisation, while Alan Moore was still pottering about with his giant naked blue man’s penis.

The glossary accompanying 3WW provided reference points in the form of book lists, NGO reports and documentaries, as well as historically-verifiable facts. Throughout its life Crisis retained links with the Green movement and Amnesty International, demonstrating that the news didn’t end with where the News would have you believe. You could get active and involved and for god’s sake, make an effort.

After the initial first book of seven stories (fourteen issue) closed, Mills became more interested in race and policing in London. This new narrative scene timed with format changes in the magazine and started a trend which allowed for Crisis’ death knell. Warren Ellis, writing at Artbomb, had this to say on its demise,

“And when it all fell apart, as it was always going to do, the idea of adult graphic novels in Britain largely went with it. The money was pulled. No-one at Fleetway was going to get a second shot. No other publisher – being careful and scared – was going to put their money on the place where the floor fell in.

And, to this day, no-one’s really been back there.”

Sputnik on Fortunecity has a page with a few details of Crisis and 3WW and I’ve just made a blog with a few transcriptions available.

Neither of these are well-formatted but they are informative. Third World War has not been reprinted recently, bar a few Flickr users, although there is a 2000AD thread (rightfully) calling for Book 1 to be reprinted.

I have it from my sources that we may be seeing the return of a commercial British political comic from one or more publishers in the forthcoming year.  I reckon Warren would visit.