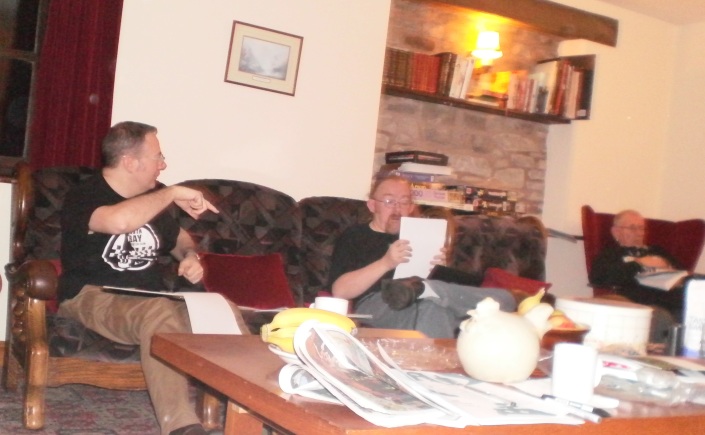 Culture Night is almost upon us. It’s the biggest day of the year for Belfast with a hundred thousand descending on… four hundred events? All run by volunteers.

Then I’ll make my way through the crowds to the Costa Coffee on Castle Place. From 7-9pm Studio NI/Titania are running a unique Open Mic with performances filmed and some contest or other. Turn up to both and I’ll not pop the same material.

Terry Wiley passed away earlier this month. Terry was an independent cartoonist. He had a style which any-one could look at and say, ‘that’s a Wiley’. He was detailed and graceful and infused his characters with life. In the 90s he co-created Sleaze Castle with Dave McKinnon. A tale of dimension hopping students, it drew influence from psychedelia, Subgenius, and quantum malarkey and Terry brought all of that to the pages in every conceivable magical aspect. Sleaze Castle had, perhaps, a cult following? A small but passionate readership. Terry was similarly magical. He looked part-squirrel, part gnome, and could be so easy-going I found him a bit intimidating on our first meets. Or maybe I was star-struck. Or maybe it was because that first time I had the accidental honour (and I was aware of it) of sitting next to Terry and Dave for a Balti in Birmingham, and I’d never seen candles under food or a balti bowl before.

Huh. There’s too much to write about Terry. He was a regular fixture at the CAPTION festivals, sketching and yarning, and building unusual props. It was the Midwinter Comics Retreats, (MCRs), organised by Debra Boyask, where I got to know him. Recipe: a dozen cartoonists in a country cottage, plied with home-cooked food and booze, tasked with creating a book over a weekend. It was Christmas come early, with a substitute family. (Debra made sure all the men wore ties at dinner)

The MCR comics were high nonsense. Above, Terry describes the plot of the first two. This page introduces the third book, Hellspoon.

Terry was massively prolific, finishing about two to three pages a day. Somehow he also found time for the craic, curmudgeonly rants, and enlightening us with poignant observations. Ha! I’m just remembering the last MCR. We’d picked up that it was also the abbreviation for My Chemical Romance, whose lead singer Gerard Way also writes for DC comics. Our MCR was traditionally happy to be low-key, but Jay and Terry got it into their heads it might be fun to take back the hashtag, and so began uploading pages and jest-trolling MCR fans on Twitter. 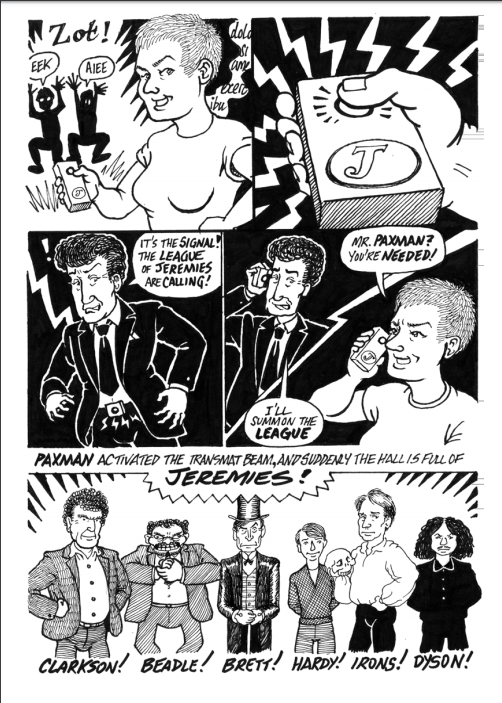 The League of Jeremies, by Terry Wiley, from MCR Hellspoon.

There’s a selection of the Retreat Comics for free on the Factor Fiction website, and some other books Terry worked on with them. His last work was Verity Fair, which I’ve heard nowt but great things about.

I visited Terry in the care home a few weeks before he passed. He was more concerned about me than about himself. That was the measure of him. He was well loved throughout the communities. He was brave as could be.

I have a lot of new work up on Patreon. The poems Handle-Guards, K. What? and Green-Way/Decoded. There’s also new short stories, The Youth of 2062 and Riot City, Junk Garage. Very soon these are joined by the first-look at my new novella, Spide: The Lost Tribes. More on that soon.

Take care of yourself and yours. Good night,