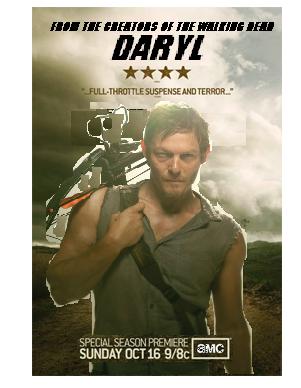 Daryl is the spin-off from AMC’s The Walking Dead, greenlit by A. C. Coffay November 2013. Norman Reedus stars in the title role, with Melissa McBride and Michael Rooter, reprising their roles as Carol and Merle respectively. Logan rounds out the cast as Daryl Junior. The series runs simeoultaneously with the Series 5 of Walking Dead.

The series follows Daryl’s departure at the end of the The Walking Dead (Season 4), reuniting with Carol Peletier. With his son and zombie brother, they live in a caravan on the edge of a bear forest: well furnished, and outside covered in wee. The steps of the home are made of brick which he uses to chop things on. There would be a lot of chopping – wood, metal, bacon, plastics. The group remain in the caravan until the mid-season break, “Underneath the Bridge”.

The show is produced by Robert Kirkman and Frank Darabont and showrunner Ed Wrankler. A communications oversight caused the show to lose it’s original title, Daryl on Arrival. The name instead was given to the pilot episode and after the hiatus, the live talk show hosted by Chris Hardwick.

It is the first show to use a consumible product consultant Sonya Weenikiller. [citation needed]