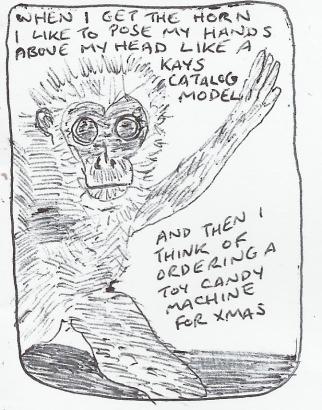 I drew that picture last month.

I pulled on the monkey costume and looked in the mirror. I did it to see what it was like in the cage. That night they put us in the house to sleep. I forgot to escape. Some of the men stole us. In the morning we woke up before the men. We all went into our cage (which was really the means room) we played with the alarm clock. Then I noticed it was an alarm clock. The other monkeys woke the man up. A monkey snatched his nightcap and put it on. Then he threw it at him. He fell down the stairs. It woke the other one up. I threw Sugar Puffs at them. I rang the police. They came to get me but at that moment the police came in and said, “What a clever monkey!”