“Solipsistic Pop is a biannual anthology designed to spotlight the best in alternative Comic art from the UK.” 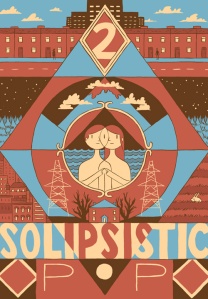 The first issue was part fashionable show-off object full of comics such as,

Rachel Reichert beautifully colouring a spider into a butterfly.

Tom is the one of the great folk identified with Solipsistic Pop and with Volume 2 launched only a few days ago, it seemed we might like to read an interview with him.

Tom Humberstone: Thanks Andy. That seems like a long time ago now. I really miss it actually. I’m hoping to return to America for a prolonged period of time again as soon as I can. If only for the bagels…

AL: I get the impression Sol Pop people are all young, thin, talented and incredibly gorgeous. What’s in it for old wrinkly jaded fatties like me?

TH: No, I’m pretty hideous. But if the work implies an inherent beauty within all the contributors, I’ll take that compliment. There are some artists involved in Solipsistic Pop who I’ve only spoken to via the internet. The work is, of course, the most important consideration when putting together the line-up. Physical appearance should have very little to do with the artists or the audience. Maybe I should have gone for a funny answer though…

AL: In your reading, do you have any particular stand-out favourites? For me Mark Oliver’s “Quadropticon”, a comic which will be readable whichever way up you hold it, is quite seducing…

TH: It’d be unfair for me to single out any particular highlights of either book. Best to leave that to someone more objective. Most reviews of the first book selected different pieces to discuss which is what you hope for with an anthology. Everyone taking part is in there because I love their work and want to publish it so it’s safe to say I’m a massive fan of everyone involved. You’re right though, Mark’s Quadropticon is an amazingly inventive piece and well worth wall space in anyone’s house.

Above: An excerpt from Kieron Gillen’s manifesto, full version here.

AL: I really enjoyed the text piece manifestos by yourself and Kieron Gillen. Is that attitude and ethos indicative of how Sol Pop came about? Is everyone involved a drinking buddy with a mutual awesome feel towards each other’s work?

TH: Kieron’s introduction was a wonderful addition to the book and something which still manages to put a smile on my face. The manifesto I wrote with Matthew Sheret was something that was written to lay the groundwork for what we wanted to see happen in the UK comics scene and the comics industry in general. It set an agenda for Solipsistic Pop and Sheret’s We Are Words + Pictures. Most of the points in it are fairly self-evident and those working in comics wouldn’t see anything in there that seemed revolutionary at all. But the point was to collate those thoughts and somehow use them to form a blueprint for what we wanted to achieve over the next few years.

Some of the artists in Solipsistic Pop are good friends who work in entirely different fields but whose work has always seemed appropriate to comics in my opinion. When I set out to make Solipsistic Pop, I knew I wanted the contributors to be a mix of established alternative comics creators, up-and-coming creators, and people working in other media giving comics a try. The result is a a varied mix of surprising and fresh approaches to the medium which I find really exciting.

AL: There’s a conscious decision not to make a comic but a packet of comics, with inserts and inserts. This is a hark back to the comics with free gift days, or calling attention to detail?

TH: It’s not so much trying to mimic a specific ‘free gift’ approach but more about making the most out of a physical object. With so many fantastic digital options available to comic creators and publishers, there really needs to be a *reason* for the comics to exist in print. Beyond the high production values of the organic inks, high quality paperstock, and lithographic printing techniques – I also wanted to make each volume a boutique object that is uniquely suited to the content and theme of each book. The first book contained mini-comics as a nod towards the humble small-press UK comics scene and my fondness for the charm of crude, photocopied booklets. Both books come with a newspaper insert which references a Sunday funnies approach. A tradition which informs the American comics scene and which has thus informed our understanding of the artform too. These additions are carefully considered and, if anything, have more in common with the McSweeney’s Quarterly Concern approach to publishing.

AL: How is it funded? Surely production and distribution costs eat up a lot…. (the free style bag-for-life is kinda pretty)

TH: Yeah, Philippa did a superb job with that design. I fund Solipsistic Pop myself. Using savings and whatever freelance work comes my way on top of my full-time job. It’s a struggle. And it has meant that publishing my own work has had to take a slight backseat. But it’s worth it. I’m incredibly proud of these first two volumes and I’m already excited about my plans for Solipsistic Pop 3.

AL: There’s a question I should have asked you but my girlfriend just broke up with me. What was the question and it’s answer?

You buy a copy of the newly released Solipsistic Pop via their website. Volume 1 was subtitled and themed “Broken” and the new edition, “Middle”