In the second of a four part article on creative and social networking and fandom across the UK, we’re going to turn our attention towards Ireland.

After hearing about the success of pub meets in Birmingham in 1997 I fly-postered around local comic shops in Belfast for a monthly meet. Numbers were small, four to six creatives amid ramshackle crowd noise. It did serve as an opportunity to compare reading tastes and art tips and nurtured a few good friendships. Busy workloads meant the group drifted apart as many do. When I returned in 2009, I was welcomed into a new group, which was larger and better organised. The Belfast Comics Pub Meet takes place on the First Thursday of the month at the  Cloth Ear from around 9pm or so. For further details, drop myself or Paddy Brown a wee line.

“That’s not Ron!” screamed his missus in block caps.

Dr. Sketchys has been replaced by Real Sketchys, which runs at The Black Box, Hill Street, Belfast on the first Thursday of every month from 9pm. The Drink n Draw also offers artists the chance to sell their work. Contact point might be Adam Turkington (@AdamTurks)and Seedhead Arts, here on

Eugene Doherty runs the Belfast SF Group at the Errigle Inn, Ormeau Rd, Belfast on alternate Thursdays. There’s an emphasis on hard science word has it, but also a bit of craic. Contact Eugene for more details.

“The Other Ones” is a younger (20s-30s) SF,  Fantasy and gaming group meeting alternate Wednesdays at the Metro Bar, Botanic. Their emphasis is largely on the social, those misfits, and their Facebook group is here.

The Dublin Comics Jam is well attended by a colourful bunch, and held around the 3rd Thursday of the month at Lord Edward (opposite Christchurch), Dame Street. This has Drink and Draw aspects although I’d wager a lot of networking and friendship goes on too.  I’m told Kyle Rogers is a good contact, though they have a mailing list which you can join at dublincomicjam (at) gmail(dot)com for updates.

Out on the remote coastline of Galway, Donal Fallon sends me news of the Galway Pub Scrawl,

“The Pub Scrawl started in response to the Drink & Draw in Cork. We get about 10 people or so every week, with more some weeks. We’ve been hanging out in McSwiggans, which is kind of small and dark, so I guess if I got the numbers up we could get some bigger, brighter pub to make provisions for us. It’s fairly informal, we just chat & draw and mess around. Some of the guys (including myself) are into comic book work, but we haven’t discussed it much here. The NUIG Art Society do a comic class of some kind at the moment. I’d have to search around to get you more details, but some of those guys come to the Pub Scrawl. If you see Ruth Campion’s name in the Pub Scrawl group, she’d be in the loop about that kind of thing.”

UPDATE: Since writing this I’ve been invited twice to ComicsWest, a great comics festival run by the Comic Book Society at the University of Galway. They’re dedicated and it’s likely they run a pub meet or two. Here’s the link to ComicsWest facebook page.

“You can certainly list me as the contact, but there’s no formality or leadership. It’s more an exercise in getting people to draw who might not, or getting those who do to share their skills/approaches in a comfortable setting. I’m hoping to get it up to 30 or 40 people over the next few months. Considering we have an Art School and a Comic Shop here in Galway, there should be the audience!”

Galway Pub Scrawl happens weekly in McSwiggans between 8:30-11:30. You can contact Donal or others and get more information through the Facebook group.

Omitted from the original article: Dr. Sketchys, which no longer runs at the Menagerie. Here’s the original graphic for posterity. 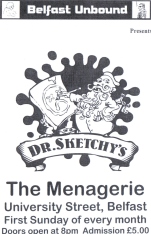