The French have Angouleme, were a whole town literally is populated by comics types. Americahas the San Diego Comic Con, a bustling business strip, sea of traffic, sales booths and sponsored panel events. The British have Caption, which is 150 people on Oxford University grounds, or a suburban community centre. Each year Caption is a different festival, through its adoption of a different theme, yet those who try it once re-attend in future years. Treasured by professionals and hobbyists alike, Caption is seventeen years surviving. This year their theme is ‘Away with the Fairies’ and I figured it were a good time to round up a few of these regulars and email them about the mechanics of attending and running Caption.

Jenni Scott (comics journalist and academic), was part of the original committee, and after a five or six year absence returned, to help ease in a new committee and out of a love for the event. Sharing houses with members of those committees afforded her the ability to use, “a whole infrastructure available to them, a bunch of contacts, and a history; and of course various war-scarred veterans of CAPTION-running that they could ask for help or hints”.

Andrew: The experience as both a show-runner and a punter has given you a great vantage point.

Jenni: That last bit could easily be a disadvantage; we all have our own feelings on what CAPTION is really all about, and I think in the hand-over from one committee to the next that’s something that’s always run the risk of changing and mutating and the concomitant risk of in-fighting. I say risk — each group brings its own unique feel to it, and that’s a strength — but a new committee could have aimed to make CAPTION much bigger, for instance, and while that would be a laudable intention I personally would have had doubts as to its feasibility and desirability. It’s amazing that CAPTION has done as well as it has, in successfully handing over the running of the event not just once but twice.

Andrew: What advices can you impart from occupying those two roles, that those in similar areas might bear in mind ?

As far as advice to others is concerned, well. I suppose it would come down to the following things, most of which were covered by Jeremy in an article in the SpaceCAPTION1999 programme. 1) Find a good, laid-back venue with enough different spaces that you can have reasonably separate events at the same time. 2) Make sure it’s on one site (the split site at GlasCAC 91 was the reason we did CAPTION in the first place) and make damn sure it’s got a bar (absolutely vital — you can have a minimal con at a pub perfectly well, but don’t try having a con without a bar. Ever. Even in America.) 3) As far as organizers are concerned, get a good group of you together and make sure you meet fairly regularly — you will prompt each other into doing stuff and thinking of new ideas. 4) Just bloody do it. Even if it’s not perfect, it will be better next time, probably, and it will have actually happened as opposed to never quite.

Dan (Hartwell) was chairman of Caption between 2006-2008. I ask him about the public face of Caption, he doesn’t really see that as a necessity.

“Caption is already almost an institution, so it doesn’t really need the dynamic publicity of a brand new con….I’m not really one for hanging out on message boards and the like anyway, I just prefer face to face interactions really. It’s not about basking in the glory, as long as people come and have a good time I’m happy”.

Jenni backs this up with an anecdote about a panel with a Surrealist theme in a previous year, chaired by a chair. Caption is shaped as much by its attendeesas its committee. Its they who fill several A2 scribble pads, design tarot card sets, attend and explore creativity through workshops and make 24 minute comics. Panel discussions are intellectual, business, or entertaining hyper-ego. Somewhere else, a Reduced Theatre company delivers The Invisibles in ten minutes, “bloated and decadent take on Grant Morrison’s super-hip series featured rampant baldness, scrumpy snakebite smart-drinks and a chorus of bloodthirsty mutant badgers.” Or perhaps men wearing crash helmets beat each other senseless with six-foot cardboard cut-outs to the music of James Kochalka. In the bar, I could easily wind up chatting to D’Israeli or Monkeys Might Puke’s Dan Lester, or the Kirbyesque Martin Hand. Within ear-shot of Karrie Fransman, who has just been picked up by The Guardian broadsheet, Douglas Noble, Al Davison, or Rich Johnston. Its this attitude of professionals and hard-working hobbyists sitting together informally which has earned Caption so much respect.

Myself, taking down a Jam exhibition at Caption 2008. Photograph by Damien Cugley.

Andrew:  I’m guessing you must have barely broken even in those days with low admission costs, 10% sale or return and non-profit auction  It seems these were conscious choices ?

Jeremy: Caption is and always has been a non profit making event. The original pot was raised by all the committee members putting in £10 as a founding membership. When we found at the end of the day (it was a one-day event in the early days) that we’d not only raised a substantial donation for the London Cartoon Centre with a very successful charity auction, but also made a considerable profit, we tried to give the profit to the LCC. They requested instead that we run a similar event the following year, using the proceeds, so we did some research, got some advice and ran it again the following summer. We made some mistakes, and lost quite a lot of money, but the excess from the first year bailed us out — starting Caption’s heavy year/lean year pattern where a cheap but popular convention would subsidise a more expensive convention the following year with lots of guests or whatever. Of course, we don’t set out to make money, but I’d still like to say thanks to the many members, supporters, workers and friends, whose generosity has kept Caption afloat and solvent — which, as far as I’m aware, it always has been.

Selina Lock with her partner, Jay Eales, is one half of Factor Fiction Press, and has been to a fair few small and large comics festivals, as a stall-holder and a guest. When Caption’s previous committee announced its retirement in 2005, Jay, Selina and myself joined Dan in being the first to ensure it survived.

Selina: Prior to getting involved in comics I’d had been part of online Pratchett and Doctor Who fandom since 1996. Blimey! This included participating in, and organising lots of real life meets. I’ve made some really good friends through fandom, so it’s always been a big part of my social activities.

Andrew: As a fan and show-runner, what does Caption do differently that you’re particularly pleased with and how rewarding is that as a part of your life beyond 2000?

Selina: One of the things I love about Caption is that selling comics is not the main focus of the event. It’s more about creativity, having a go at things and celebrating creativity. Every other comics event we attend involves us sitting behind a stall selling our comics, which can be great and is essential to getting our work out there. However, Caption always gives us more of a chance to chat to other creators, attend panels and workshops and lounge around the bar. That’s why we’ve attended every Caption since 2000, and why we volunteered for the committee when it looked like Caption might disappear. Of course, we don’t get much chance to lounge now we help run it!!

Dan:  Finding out if I was capable of doing something like this, I was very happily relieved to find that the last two Captions went down well. Here’s hoping the this one comes off without a hitch too.

Over the years Caption spawned around twenty-five issues of a magazine, and has organised several mini-showings of its events around town. I’ve used Caption to work with other storytellers, and in August, to host a one-month showing of ten cartoonists an Oxford art gallery. Its also a great place to rig up ideas promote attitudes of creative energy, respect, fun and profit share for cartoonists. “Caption is a celebration of the medium and a chance to catch up with old friends”, said Oli Smith, co-author of Bloc.

This year the ‘Away With the Fairies’ theme includes events hosted by Asia Alfasi, Garen Ewing, Sarah McIntyre and Jimi Gherkin. Caption 2009 occurrs in Oxford at the East Oxford Community Centre on 15-16 August. For more details see www.caption.org and http://community.livejournal.com/caption

Its also worth mentioning that Jimi Gherkin is managing the Alternative Press Festival 2009 which happens in London between Wednesday 29th July – Sunday 2nd August 2009. Together with Veri Ceri, Gareth Brookes and Peter Lally theres a load of stuff happening. The event includes an anthology including the works of Mark Pawson and Roger Sabin, film screenings, talks and live music from Resonance FM. For more information visit http://alternativepress.org.uk/ 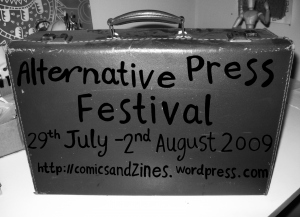